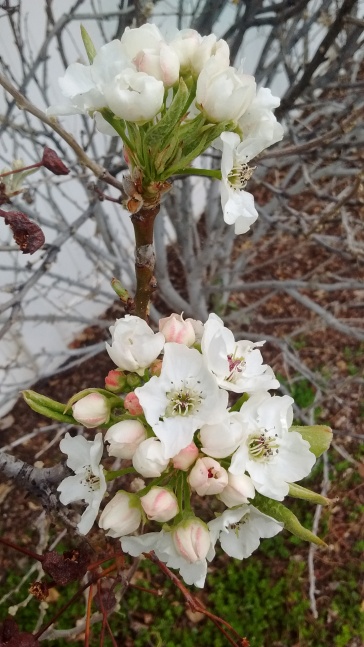 Years ago, a somewhat controversial movie came out titled, “American Beauty.” I didn’t dwell too much on the controversy, but I do remember two young teens watching a film of a plastic bag blowing in the wind. It was so hauntingly beautiful and mesmerizing. I hadn’t thought about this movie in a long time. The scene goes on to show a young man with dark intense eyes proclaiming, “Sometimes there is so much beauty in the world, I feel like I can’t take it.”

I find myself reviewing scenes such as these to tap into my own humanity. I wrote a soul-affirming paper not too long ago about the infinite sublime. For my contemporary comparison, I utilized a scene from “The Way,” and made a connection to a man who wrote a book called “The Only Kayak.” This was my first conscious dive into analyzing the sublime, although I have been completely taken by it so many times in my life without comprehending it.

Yesterday I went for what I refer to as a “walk-about” and realized that I had missed it. This digital world of social networking and negativity had been robbing me of one of life’s greatest gifts. How many of us are lacking in experiencing the greatness of the sublime? I have felt this misalignment in my energy for quite some time. It seems as if I have been bombarded with quotes that have presented themselves to me at random so I could ponder my current existence. I was reminded that I needed to “do more things that make me forget about checking my phone.”

I also ran across this Rumi quote that inspired me. “Yesterday I was clever, so I wanted to change the world. Today, I am wise, so I am changing myself. I have been so caught up in my activist pursuits. My public relations course has had me pondering Mark Zuckerberg, and how taking to the internet is like taking a road to China. It seems we are all under surveillance in a public square. I had been pondering infringements on free speech and net neutrality, and the negative repercussions of media conglomerates. I’ve been watching pleas from Syria and seeing the threats of war made by our president on twitter. Thankful that my daughter’s time is coming to a close in the Marines, but knowing she will always be tied to it.

As an empath, these are things that normally send me into a tailspin. If not this, then it would be something else. CBS has been full of “good” news lately. I see that they have been much more progressive about reporting on climate change over the past few days.  I read a report about the world’s major cities running out of fresh water, and another story about how our saltwater fish are set to die out by 2040. I read this report with a sense of sadness. I am so taken by videos of fishermen who encounter pods of whales on their small fishing vessels. These are also the videos I will watch to set my soul soaring like a beach kite. It would be so sublime. Yet, these are scenes from someone else’s experiences. Am I living in a way that the sublime can touch me in ways I never imagined? Do I need to admit defeat and realize that this planet may be on hospice and I need to love her while I have her?

I recall the day my neighbor was being wheeled away from the Cancer Floor to the ICU because his battle with Cancer had taken a turn. His wife was in shock, looking for a familiar face. Any straw to grasp at. It was as if she were drowning and someone needed to throw her a line. As my neighbor was being wheeled down the hall on a stretcher, he called out my name in greeting as if he were just running into each other at church and he wasn’t dying. I had no idea he had been a patient on my floor. I reached for his wife’s hand and realized how serendipitous it all seemed. She burst into tears.

There had been talk about his worsening condition. They had tried everything. They had tried alternative treatments and flown to other countries. She was seeking the next course of treatment to keep him alive. There were hushed conversations that the quest for the next treatment was robbing her of her final goodbye’s. In that week, she made the transition and crossed the threshold from perseverance and denial into acceptance. She had one week to say goodbye, and then he was gone. I think of her often when mourning the potential loss of all that I love. I wonder sometimes too, if I should just give up this fight, and say my goodbye’s. Enjoy the remainder of my life, and the time I have left with this beautiful planet, and all of those who are in my vicinity. Am I robbing myself of precious moments and opportunities that aren’t out of my reach?

I ponder the things I carry with me, and the things that I project as my presence carries its own vibration out into the world.  This “house” of emotions that I have created for myself, is it a place where I want to live? Do I feel love and peace here? I have so much anger wrapped around myself like a knotted ball of yarn that needs untangling. These are strands of people who have hurt me, or events that have pierced my life experience. Do I really want to carry these strands with me, or cut them loose, so I don’t feel so confined by how I choose to encase my soul? Why do I continuously carry the repercussions of others animosity onto myself?  That is their deal. Carrying it with me, is mine.

I have a “daughter” who would not call me mother, although we have come close a few times. It breaks my heart that we keep missing the mark. She is now walking the Pacific Crest trail and sends my husband random messages of her current location. We try to get a flavor of her experiences as we watch YouTube videos of a young southern woman by the name of Dixie walking the Pacific Crest trail with her friend Perk. Both these women have inspired me.  Sadly, I feel closer to one than I do the other. They both carry the same message. “Get outside Rachelle, experience the elements. Breathe in the Prana of life. Love all this creation while it is in your grasp.”

I have habitually been plugged in like everyone else. My children are following this example. We need more moments of being on our knees and sticking our hands in the dirt. More time watching the sun rise and set. More time to live our lives in a way where we forget about checking our phones. So, the other day, I walked out under the dampness of spring. Not knowing the possible effects of wind or weather. I only thought about my husband’s daughter and Dixie putting one foot in front of the other facing surmountable odds with the elements. How silly it seemed to be a little fearful of a little rain in suburbia. How could I climb mountains or even fathom achieving my dream of covering any portion of the Pacific Crest trail?

Another quote presented itself. “Sometimes the smallest step in the right direction ends up being the biggest step of your life. Tip toe if you must, but take the step.” So, I ventured out in to the rain with the notion of being fully present. I remained watchful and alert of the all beauty around me. The damp coolness of the air felt refreshing. I noticed the beauty of a tree trunk and pondered fractal geometry and the beauty of the Mandelbrot set. I captured this image of the first spring blossoms and the wonder of self-similarity that pointed to infinity.  It was a step to rediscovering the sublime. This is when I thought of that scene with the plastic bag blowing in the wind, and a statement that had almost been swiped from memory. Yes, sometimes there is so much beauty in the world I can hardly stand it.

3 thoughts on ““Sometimes There is So Much Beauty in the World I Can Hardly Take It.”- A Quote Remembered”