Hello out there. I have been off the grid for the last two weeks, but I am here to declare that I too am “safe” from Donald Trump’s national emergency. That news came to me while sitting in a hotel room in Las Vegas. This came shortly after finding out that Bluffdale, Utah had two small earthquakes. Two of my children were  home sleeping and did not feel a thing.

I had to leave my son home with his sister because I did a thing. Let me tell you, it was a hard thing. I don’t know what it is about having an autistic child, but it makes a mom overprotective. It seems like when someone has a target on their back, you just want to protect them even more. Long story short, I said he would not play a contact sport. Okay, I worked in a spine clinic and I’ve seen too many MRIs. I also took care of a few former professional athletes with too many concussions.

My son wanted to play lacrosse really bad. Okay, his sister played lacrosse. I was down with that. Than, I found out boys lacrosse and girls lacrosse are not the same. After some soul searching and buying him the best rated helmet on the market, we are still doing this. It’s the great experiment. How is my child with high functioning autism going to do on the lacrosse team? I don’t know. So if you are hanging with me we are going to find out. I sent a daughter to the Marines. I can do this.

I am also sending a daughter To the OR soon for Neurosurgery because she has a tumor in her middle ear. These are the things that will test the faith of any mother. I am suddenly reminded of this picture I took as my husband and I were leaving Vegas and heading for a snowy canyon gorge. Incoming weather straight ahead. The sky was growing dimmer. Cars coming from the opposite direction had their lights on. Approaching diesels had inches of snow blowing off their tops. This was unusual weather for Southern Utah and Vegas. Last week I got a text early in the morning, because Utah had a severe storm warning. All schools in our district would be closed. Okay, Utah rarely closes their schools for anything. When it snows in Utah everyone gets in their car and goes to work even if they have to leave at four thirty in the morning. If someone slides off the road or gets stuck, other drivers get out of their car to push them so traffic can keep moving. This is Utah.  So, last week we broke Utah’s last standing record for snow. We hadn’t had a storm like this in nine years. Even weirder, my girls were also getting snow in Hawaii. This is them on a better day. This makes a mom happy.

I called to ask them how it was going and they were like, “Psh…this storm is nothing, we grew up in Utah.” So needless to say, my daughter’s trip to the tropics was accompanied by snow, and my trip to the desert was accompanied by biting winds and oncoming sleet. I hit forty degrees near Lake Mead and said, I will take it! I was able to capture 65 degrees near Phoenix and I basked in the glory of the evening’s sunset, the 🌵 cactuses, and the smell of 🍊 orange groves. I was writing an art paper on Frida Kahlo on the side, so the ambiance was perfect with all the courtyard houses, Spanish-style churches, and brilliant displays of front yard Catholicism. 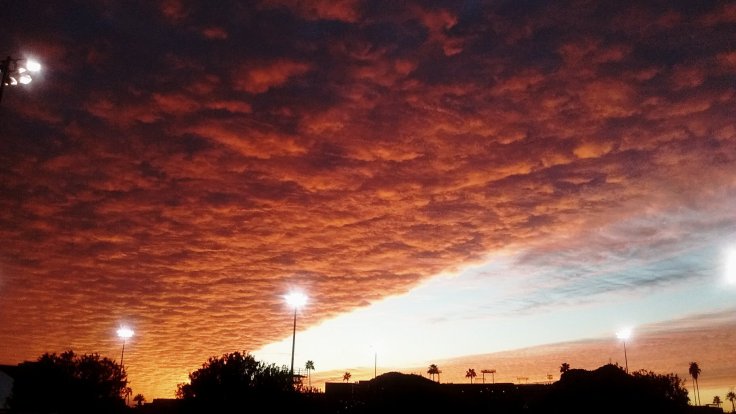 On the way back from Phoenix we went the North Grand Canyon route through Kanab. My husband wanted to relive some old memories from his Grand Canyon river rafting days. Siri said this was the fastest route, but of course you have to take into consideration bad weather, and the possibility of canyon closures.

As we approached steep mountain climbs I could see we were getting above the snow line, and I was seriously wondering if we would get through to the other side, or be facing a canyon closure where we would have to turn around. I had my eye on the gas gage making sure we were covered for either scenario. We made it to the entryway of Lee’s Ferry and Navajo bridge.

My husband walked the bridge while I discussed gem stones and turtle necklaces with a Navajo woman. My husband came back to tell me there were three California Condors on the other side. If you know anything about California Condors, they are rare and their numbers dropped to nearly 35 in the nineteen eighties. Their biggest threat? Lead bullets. Since they are scavenger birds they have been nearly wiped out by lead poisoning feeding off the carcasses of animals that were shot with lead bullets. They also have the largest wing span of any other bird in North America.

I am not a fan of heights that drop down both sides. Navajo bridge is a long bridge, covering a vast gorge and it’s a long way down. Once you are in the middle, it is quite the distance back on either side. It was a dizzying walk across the bridge, but I made it. I had to do it for the Condors. The Condors were splendid. I was reminded that sometimes everything you want is on the other side of fear.

I got comfortable on the bridge once my parasympathetic calmed the freak down. The drive into the snowy oncoming “Gorge” leaving Las Vegas was not as threatening as it appeared either. Somehow I am going to make an analogy of this and tie this in with my daughter’s upcoming neuro surgery and my son playing lacrosse. I have no idea what it is up ahead. It sure seems threatening, but I am going in because sometimes everything you want and need is on the other side of fear. This trip was a great preparation for me. Those Condors provided powerful symbolism and that is what I love about nature.

The following week I got synthesized aesthetic and vast amounts of overstimulation from the streets of Las Vegas. Vegas is the city of excess and mass materialism. I did get lost in the wonder of the Cirque de soleil Beatles show, swimming mermaids, and the mass reproduction of the Roman Empire on a large scale which was rather impressive.

I was completely taken back by Caesars Palace, the light show on Fremont street, and the hula hoop dancers from the Sin City Circus. Not to mention, the Heart Attack Grill on the corner where everyone dines in hospital gowns, you can eat a 9,600 calorie burger, and if you are over 350 pounds you get to eat for free. What is it about mass materialism, a life of excess, mass overconsumption, and fake facades that teach us something about ourselves? I forewent that experience and had fire roasted pizza elsewhere.

Vegas is not a place for empaths. The Beatles show was my sin city Oasis. Thank you John, Paul, Ringo, George for the amazing music and the performers from the Cirque de Soleil. God bless the mermaids who had to suck oxygen from tubes periodically just so that they could smile at us from behind their goggles whilst blowing kisses and making bubble heart shapes in the water. My blessings to the man lurking in the reef behind them in diving gear in case there was trouble.

Vegas has never been on my list of places to go, but somehow I have always found myself there. Multiple times. Many heart wrenching trips tied up in Vegas since my youth and trips there with my grandmother while my step grandfather was incarcerated for bank robbery and drug dealing. Kind of an earth shattering sentence there, but this is my truth. No child should set foot in a Vegas prison ever, but I did. My mother remembers living in Vegas when Kennedy was shot. These are all stories for another memoir which I may or may not ever write.

I have decided the bottom line is…Vegas…happy to go…happy to leave…and despite all of the extremes in weather, snow, earthquakes, and sunshine it was all part of the experience. So there you have it. The opposing sides of two extremes. I am home, sleeping much better, and grateful to be here. No dreams of white tigers for me but as John Lennon would say…still my guitar gently weeps, and there is a restful slumber knowing that there are three California Condors out there somewhere and I got to see them:)