Greetings to you all. It’s been a couple of weeks and I’m writing this with the ole’ one eye. This sounds like some far fetched story. It’s kind of like the story of how I had to have my tongue sewn back on once, which is also a true story. Trust me. Just don’t play Tarzan with your mouth gaping open while jumping off of your back porch near a sprinkler head. My jungle call did not serve me well in that situation.

Anyway, if you are wondering what happened to my eye, I got pelted with Yellow Hare Krishna powder at close range by an antagonistic foe. I have no idea what happened really. One moment I was dancing and the next I was getting pelted in the face with half a packet of yellow powder right in the eye. This was NO ACCIDENT. I didn’t know that getting pelted with a packet of powder right in the eye could feel like someone had knocked the wind out of me, but my knees collapsed and I felt like I had to catch my breath because it hurt so bad. The only thing I could think of was that I needed to get to an eye washing station STAT.

I don’t know. This was not the Krishna consciousness I remember. As I was looking frantically for a place where I could rinse my eyes I saw a dog that had blue powder all over his eyes and eyelashes.  I sympathized with the poor animal. Trashes were overflowing, their was no recycling and garbage everywhere. I saw a sign that said “please respect our temple and do not place your handprints on our temple walls.” Right near the sign, there were handprints everywhere. Punks.

There were NO eye wash stations. I poured two water bottles into my eye after waiting in an agonizing short line and paying a dollar a piece for them. SADNESS people. My eye is still flaming red and stings like a MOFO. I’m getting it checked out tomorrow. This was my attempt to live it up, cut loose, and have some quality time with my daughter.

I’m really feeling the energy of oppositional foes lately. The kind that come out of nowhere, troll ya, throw paint in your eye, or do something shammy with your bank account. I’m feeling exasperated by a professor’s ego right now. My husband and I are not talking. I took my son bowling with some of his “friends.” When there’s free bowling involved my son has friends. Did I just sell out?

If you want to know two of my least favorite emotions they are humiliation and being excluded. Something my son knows so well. The bottom line is…my son’s friends are growing up and realizing my son’s autism doesn’t necessarily suit their “cool factor.” My son’s friends parents are sheepishly apologetic and I just want to say, “I GET IT. I SO GET IT. Don’t you think that as a mother of an autistic child, I don’t get it?” I can’t say I had any special needs friends in high school either.

The Trump Effect. News of the the special olympics being axed with autism programs, the NRA is lobbying against the Violence against women act, the income wage gape voted down. Bernie can’t win according to the papers. Biden is a fringe player when it comes to inappropriate touch. So long Green New Deal.

How does one come to terms with antagonistic foes and all this powder in the eye? Heaven only knows.

Shine on you crazy diamond! Self care. Self care. How much self care can a person do? This is where I am at folks. This explains my quietness.

Anyway I do have some older pics of better Krishna days before it went off the rails. I wonder if a different crowd would have generated a different vibe. So my question lately is what type of energy an I manifesting in my life right now that I keep encountering negative foes? Also…my trip to Wyoming was heavenly. There is a whole lot of nothingness between Evanston and Cheyenne. Seriously, five hours of nothing and everything all at the same time. There’s snow, snow, and more snow among blue capped mountains. There was plenty of deer, antelope, and a few elk herds. Yes, this really is the place where the Deer and the antelope play. Nothing else seemed to matter. We did hit forty mile an hour winds, and signs warning us to be careful because over thirty casualties had occurred on that stretch of highway since December. Ryan Adams on Pandora was where it was at until service was lost which was pretty often. 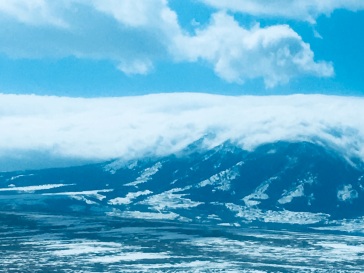 When my husband and I were in Greeley we had a tornado warning while eating at a Panera. My first tornado warning ever. Everyone seemed so calm so I did not feel like I needed to run for the basement. I just LOVE Colorado coffee shops. Coloradoans remind me of Utahns just a little more artsy and rough around the edges. I found it rather refreshing. It was like nobody was trying to keep up with the Joneses. Everyone had a beater car and the arts and craft movement was abundant in their yards.

I tell you the food situation along the highway was sparse in Wyoming. I am talking flying J style. If you want soup you are going to get beans no matter what. My choices were ham and beans or white bean chili. We did stop at a dilapidated gas station out in the middle of nowhere. The gas station smelled of curry and Indian food, and the attendants were all wearing turbans. A black van pulled up and out came a whole entire band. How weird, how random, right in the middle of Wyoming. What’s weird is that another band showed up and the bands knew each other. They had played the same show once. Trippy.

There are two items that seem to be especially popular in Wyoming, hats with fur flaps that hang over the ears and painted skulls. These aren’t your average Day of the Dead skulls either, these are more black and sinister. I also associate Wyoming with black jack firecrackers and Wyoming beer. My husband went to the liquor store to get some Wyoming beer and I asked for some chapstick. All that snow reflecting off the windshield made me feel as if I had been skiing all day.

The guy at the checkout stand had a sleeved, fresh, tattoo that was all Vaselined. He yelled “Hey, can you believe it after five years we are finally going to sell one of those chap sticks!” For some reason putting that five year old chapstick on my lips just made me feel tougher.

I also bought the best French pastries ever from a burly looking tattooed baker in Greeley. If you are ever in Greeley, I am telling you this is where it’s at. My husband looked so out of place sitting in a pink pastry shop in his Carhart hunting jacket. I am telling you, everything was a series of contradictions and I loved it.

So this is what I love today. The oppositional foes at the Krishna festival were a contradiction but in other aspects it is the small everyday contradictions that I have come to embrace. Disruptions are where it’s at people. Disruptions generate a change of perspective and are a powerful force to be reckoned with. Have a lovely day! Thank you for reading.