Hello out there. I apologize for the blatant delay. I’ve had some “stuff” to attend to and I have a little bit of news. So, Sunday I wrote my LAST paper for school and just stared at the submit button on my screen for a while. I knew when I hit that button that would be the end of it and I’d have my degree. My final thoughts as I was soaking it all in were, “How long should I linger here?” and finally… “Should I hit submit?” Than the enthusiasm took over. “Hell Yeah-I’m going to hit submit!” So, I apologize for being off the grid. I had a college degree to wrap up, and it is officially DONE.

My last two semesters have tried me SO HARD. There have been a few things that have knocked me for a loop and have made it unbelievably hard to focus. 1).My daughter has a tumor in her middle ear, (which at the moment, she is still refusing to take care of). 2). I’ve entered new terrain with my autistic teen, and 3).without getting into it…my husband and I are in a relationship. It’s complicated.

It seemed like everything came to fruition at Easter. I spent Easter with my children and no spouse. (Which sadly, has become the norm). I was sitting at camp feeling deflated because I had put thirty pages worth of research into a thesis my instructor did not like, (not argumentative enough). So, I was pondering just eating a lower grade, or starting my paper completely over.

I was camped out with my family in a beautiful spot covered with purple wildflowers discussing this with my aunt and sister-in-law. I knew I should probably not be at camp. Easter was a luxury I could not afford. I should have been home revamping my thesis.

My brother came to my rescue. He took me for a ride in his side by side and we  went exploring in the mountains all day long. I knew it was probably the wrong thing to do but it felt so right. We had some amazing talks and we went to some old caves where Johnson’s army used to hang out (they were hired to take out the Mormons). My brother and I are two and a half years apart. He was my first friend and playmate. We used to be like peas and carrots.

I forgot how much I missed my brother. I almost lost him a few years ago when he was in a horrible motorcycle accident near the muddy putty caves. I thought to myself…”things may not be going my way right now…but I’ve got my brother.” That’s enough. I can do this. I feel blessed. It almost seemed serendipitous the way things turned out. Reconnecting with my brother was such good medicine.

I also have a sister, who I helped nurse over the weekend. The purple flowers were lovely but not her friend. She did alright once she had some Zyrtec and nighttime Benadryl. She also forgave me for re-boiling her already boiled eggs which we laughed about hysterically. At least my mom got to decorate some eggs. My sister took the children on a sunrise easter egg hunt complete with salted caramel popcorn which I assumed had been doused with Redmond salt, because we were in Redmond after all. 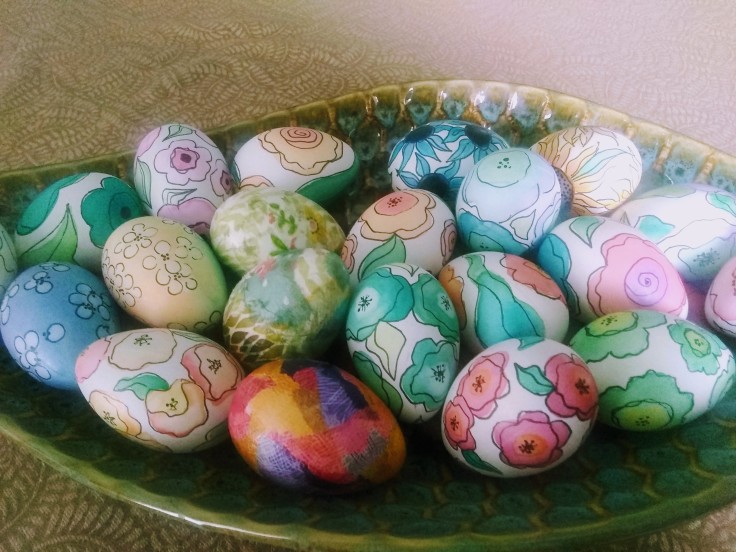 I went home, tackled, and revamped my paper. I’d put SO MUCH pressure on myself because I hadn’t had a B yet and I did not want to get one my LAST semester. A “B” was not something to measure myself by. There were BIGGER things. B’s get degrees. I went home with the notion that a B was just going to have to be alright.

I wrote…and wrote…and wrote some more. Sometimes I’d come up from the basement to get a snack, or fold some laundry. I’d get exasperated and fill a tub with bath salts infused with bergamot and orange essential oils…I’d get re-dressed…go back downstairs…and write again. I came to despise the basement. I ate a lot of Cadbury eggs.

I dreamed about Beowulf at night. Let me tell you, Beowulf dreams are just plain weird. I had another photography exhibit due on the side. Thoughts on post-modernism and deconstruction provided comfort for the anxieties in the back of my mind. Sometimes in life, you DO have to take it down, forget what you know. New forms of creationism that deviate from the norm aren’t bad. I could do it. I could deconstruct my life if I had to. I could deconstruct my paper.

I finally tackled Beowulf, than I tackled my exhibit on the subaltern. Dori’s song from Finding Nemo kept running through my brain…just keep swimming…I was going to ride it through…ONE. LAST. TIME. I was SO CLOSE. I needed to move that mountain. Paper exhaustion is real. I didn’t even know if I’d ever want to write again, but here I am.  I’ve slept a lot over the last few days and yesterday I spent all day tending to my garden.

Don’t italicize block quotes. Don’t use block quotes for anything less than four lines. When citing block quotes, the period comes before the parenthesis.

I’m not young. I’m not even in my thirties. Why did this take SO LONG? I was a single mom for TEN YEARS. I was in the medical field for twenty, and one day I JUST COULD NOT DO IT ANYMORE. I couldn’t even explain it. I just couldn’t do it anymore.

There was a time in my life that had been marked by protective orders, chain breaker meetings. and anxiety therapy. I became a recluse, because nothing will make a person more  reclusive than dealing with the shame of having law enforcement at your house (More than once). That was supposed to be some other woman’s life. NOT MINE. I believed the SHAME that is often given to single mothers. I was a cast-off, therefore worthless, and worthless to society. I was branded a deviant.

My immediate family has always called me “Shelly Bell” after the Beatles song Michelle my Bell. (Only I am a Ra-chelle). My former spouse called me Shell “DUH” bell (among other things). That’s how he got me. I was taunted for having ADD and I felt STUPID all the time. I bought into it hook, line, and sinker. I dropped out of nursing school. I NEVER thought I could pick myself up…and HERE I AM. GRADUATED. With a 3.9.

Okay, maybe that final line was a bit dramatic. I don’t know if this is going to be life changing, but I have renewed confidence, and that is something I can work with. That’s a foundation I can build on. I wanted to walk for graduation. I knew if I walked I’d probably break down and cry. There’s just something about pomp and ceremony that would cause the dam to bust. I’m not walking, and that is alright. I’m going to Hawaii to see my girl instead. I don’t need a gown and tassel to prove that I achieved something. A lei in Hawaii will have to do.

Anyway…through blurred eyes I write this. So, if any of you are doubters out there, STOP. You can do it. It can be done. Whatever it is. You can create something new. You can deconstruct your life and tear through your insecurities. Don’t believe the lies. I did. I did for too long. I’ve had so much love and support and an entire cheering section I didn’t even know about, but I’ve also noticed a few people who aren’t cheering. I don’t know what it is about people who can’t stand to see others happy. To them I say…watch me…watch what I can do.

But mostly…I say to MYSELF…Let’s see what I can do…because when I do something for me that is enough. I don’t need to prove a thing to my critics. They are irrelevant. Keep your focus on the cheering section. Sometimes it’s just a cheering section of one, and that is alright. That’s when the magic happens. It’s taken some time to get to this point, but here I am. I did it! More to come. Thanks for listening.